Sight Picture for the AR15 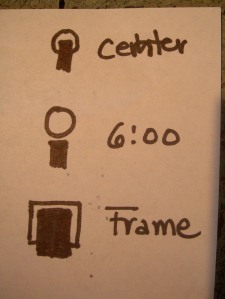 Today we had a practice match for the Across The Course with our service rifles. We were able to get our new barrels put on the rifles yesterday and needed to “sight” in the rifles at 200, 300 and 600 yards. We leave Tuesday for the big match in AZ and needed to be ready! For those of you not familiar with shooting the AR, your front sight is basically a post. To shoot well you need a consistent “sight picture”. Every time you aim at the black (black dot or bullseye) you want to have your “post” at the same spot on the target. But what are you looking for or at?

I apologize for my hand drawings but in the photo I have 3 different sight pictures that most people use. The top one is called Center Mass. You hold so the top of the post sits in the middle of the black. The second is called 6:00 Hold. Put the black on top of the post like an ice cream cone. Most will leave a narrow white line between the two. The bottom is called Frame Hold. This can only be done at farther distances like 600 yards. It will take up the entire frame of the target if you wish. Everyone has their own preferences and beliefs of sight pictures.

Myself, I use Center Mass at 200 and 300 yards for offhand, seated and prone rapid. But when I go back to 600 I found I was struggling with a consistent image. So I switched to 6:00 hold back there. Today I actually tried a Frame Hold for 10 rounds. That tanked. Needs more practice. Don’t want to deal with that before a big match. The second string of 10 rounds I used the 6:00. Much better! I still need practice but it is coming along.

I have been shooting so much prone with my bolt action rifle that I have become a bit rusty with my AR. The match this week in AZ will be 5 days of shooting. Plenty of practice to get back in to it in time for our season of shooting up here in the NW! Remember, my goal is High Master with the AR by summer’s end!