Charles and I had so much fun on this shooting trip. Although we spent 5 of the 9 days driving it was still great. Phoenix is a long ways from Seattle! I used to think I did not like road trips but I loved it! Better if you don’t plan it and see what happens along the way. As for how we ended up with the tournament? Not so great at shooting but awesome at prizes!

We both did not score too well overall. I did win my Master Class on the first day at 600 yards. We both got a few more 2nd and 3rd places at various strings. With these we won several boxes of bullets again. Friday, Berger put on a big B-bque for everyone and had a raffle for a large variety of donated products. The sooner your name was called the better the selection of gifts. I was called 5th and Charles 6th! We grabbed a coupon for $1200 towards a US Optics scope. This company is like the Bentley of scopes. All custom made. I grabbed a certificate for 5 more boxes of Sierra Bullets. Then on Sunday at the end of the match they had a raffle for a replica Flint Lock Muzzle Loader. (Photo at right) Charles and were standing there and Charles was bummed he did not shoot better that day. He was mumbling that he was probably going to win the rifle and he did not want it. They called his name!! Too funny! The good part it is there is someone already interested in buying it from us. So I guess we made out like bandits!! 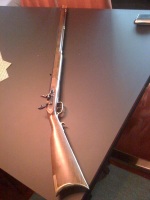