Well, not completely dead. The Range Rover barely started at the 900 yard line to move back to 1000. It had died on Charles last week. It is past its shelf life. We kept it running until we were done so were not stuck in the middle of nowhere. Then on way back to hotel we found an AutoZone and they put a new battery in for us. We had no tools. That is Kozmo waiting for us in the parking lot. OK, back to shooting.

What a difference a day makes! This morning was cool but NO winds! The first string of the day was nice and calm. That group of shooters were loving it. I was on second string. The wind picked up but I still only dropped 2 points and had 10X. These are 15 round strings instead of the normal 20. Back at 900 I still did well with only 3 down. The wind was at about 10mph and switchy. I was in the pits when the group moved back to 1000. That first string got pummeled. The winds were not being very nice. Many dropped 10 or more points. When I got back there I also dropped 11. But I knew even with that I was still in the running. And I am! I am in 6th overall. Even the first place winner for the day was 10 points down. 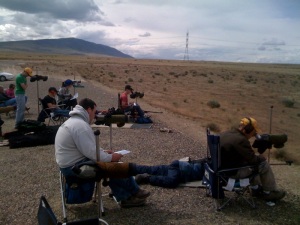 This range evens the playing field. It is merciless. You hold on. You hope your string has good or just a little better conditions than the last group. Tomorrow is day 2. Much more can happen.

We also had the team event at the end of the day. (Photo shows our end of the range.) A 4 person team. Each day we do one string at a different distance. Today was at 800. We only dropped 4 points. Ricky did a great job coaching. I am honored to have been asked to be on my team.  Lets see what happens by Sunday!