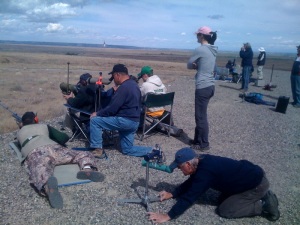 The winds kicked up a ton. I ended 1000 with about 12 minutes of wind. I was humming along with only about 2 points down and a huge gust came up and blew me OFF the target. Darnit. That’s not really what I said but I am trying to keep this PG rated. Then I could not keep up with the switches. It got ugly. That one string put me down in to 12th place or something. Everyone had an incredible fight.

We ended the day with the 900 yard team event. Boy was I glad I was not coaching our team this afternoon. I think Ricky, our coach, put anywhere from 12 – 18 minutes on our rifles. At one point we were on our last shooter Layne. Ricky and he waited about 15 minutes to see if the conditions would change. They did not. He asked for some back up opinions and that is why you see several people looking through scopes in the photo. I am standing in the pink hat. Had just finished shooting.  It was worth the wait. They finished the last 4 shots with an X, 10, 9 and 10. Whew! We were just trying to keep the bullets on paper. Our team and another got a couple of “misses”. The “Juniors” did really well. My team was in 1st place yesterday. I think we are now in second. All scores will be published tomorrow. Tomorrow…..

There is another day to redeem myself or torture myself more. This place humbles you. It is pretty cool though. I would not trade this experience for anything.