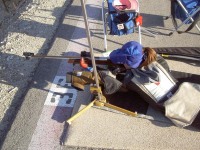 Humbling in two ways. One, my theory of the barrel being shot is way off. Two, I still had a bit of trouble on first string but second string I did well. And the yea?  My team kicked butt. We won the team event. Only dropped 10 points. Gary, John, Walley and I were team mates. I was not able to get a photo of us in time. Walley left right away and I realized I did not get the photo.

Why is my barrel ok? When Gary coached me in the team event my shots were all perfect water line. I dropped one 9 high which I specifically called. So what the heck was wrong with me on my own? Gary seemed to think I take too long to shoot my strings. I am trying too hard. I think he is right. When I started out shooting this I did not know better and shot super fast when I even thought conditions were ok. I got great scores. Lately I have been studying every shot so much it takes me almost the entire time limit to shoot my string. It just seems to be the 1000 yard line that I am fighting with. I am sure everyone feels the same but I really want to master the wind reading back there. Actually, I need to master my mental game.

Tomorrow is the High Power Match across the course. I will arrive in the morning to shoot but if it evens hints rain I am heading to mom’s house instead. Not sure if I mentioned mom lives near by in Palm Desert. I was planning on driving over after the match tomorrow but if the weather does as it predicts, rain and cold, I am outta there! I did not come to sunny Palm Springs to shoot in the rain. I can do that at home. I know, “Want some cheese with that whine?” Yep.