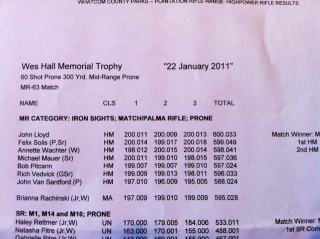 I told myself last year I did not want to compete in this match again. Why? Because it is miserably cold that is why. The match is held at Plantation in Bellingham, WA.  Last year it was around 35 degrees and slushing/raining. The pits are even colder since you are down in a cement bunker and the impact area is mud. Each bullet that impacts the hillside splatter chunks of cold wet mud all over you. Sounds fun eh? Well, back I came yesterday.. At least this year it was not raining. But it was still around 40 – 45 degrees and very wet and muddy. Actually a big improvement!

As always, trigger time no matter what is valuable. Since I am leaving on Tuesday for Phoenix for the big Berger SW Match I needed trigger time. This match is only 300 yards but it is a condensed target. So the X ring is about 2″ round. One needs to hold hard! I am happy to say I came in 3rd over all and 2nd High Master. I blew 2 points first string in the last two shots. Stupid 9’s. Cleaned the other two strings. So a 598/600. I had a great X count overall with 41X. Thought I did well until I saw that Bud Solis had 49X. Nice shooting! Oh yes, another reason I come to this match is to hand off all of my gear to Bud after wards. He very kindly drives my and other’s gear to matches if he is driving. Thanks Bud!

The match winner for the day was John Lloyd with a perfect 600 and 33X. 1st HM was Bud Solis with 599 and 49X. And huge kudos to Brianna Rachinski. This 14 year old pulled out a 595 with 28X. Impressive. Put her 7th overall. Look out people! A big thank you to Brianna’s dad, Jeff for recruiting and coaching a bunch of new juniors for Washington. Most of them gals! There was a great showing of new faces yesterday. I look forward to seeing more of them. Well, as long as they don’t beat me.