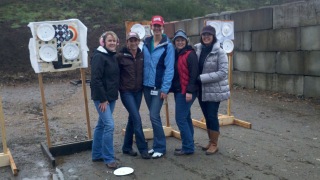 Every summer in late July, myself and about 15 girl friends go on a “Chick Weekend”. We head out to our secret location and “camp” for 5 days. Define camping? If I tell you what we get up to I may have to kill you. I believe we are in our 22nd year of “camping”. My shooting hobby must have rubbed off on a few of them because I got emails recently that some have bought new pistols and wanted to get out and use them. Finally getting organized we met at Cascade Rifle Range this morning.

A bit of a dreary cold day but it managed to stay dry while we were shooting. I put together a mental game plan to first start them off with safety and handling and then to hand position. We had a tiny S&W .380, a S&W .357 revolver, my 1911-45 and another 9mm. Allow me to introduce the gals in photo. From left to right we have Carie, Katrina, myself the tall one poking out the middle, Danielle and Michelle. Of course tiny little Katrina brought the biggest gun out there. the .357. You did not even want to stand next to her as she was shooting. That thing spewed noise and particles. She rocked it though. Smooth follow through and no flinching. She went after it. She gets gold star for the day. She even fired my 45 well right off the bat. We have created a monster. She is hooked.

We did have one minor boo boo today. Danielle moved her thumb out of position on 2nd or 3rd round and got it caught in the bolt. She took a nice chunk out of it. I think she remembered her hand position perfectly after that. It only takes once. Also, her .380 is so tiny it is difficult to handle. A few band-aids later and once all were settled in we did various drills. Single shots, then some “Zombie Kills” or “Mozambique” (two shots in the chest one in the head) and some movement drills side stepping right to left and hitting a series of targets. Then of course it is time to let loose and just shoot.  The point was for everyone to become comfortable with their guns and repetition of handling and positions.

Lunch and a Margarita later, Danielle mentions that she has a ton of frozen Elk meat her boyfriend hunted that they could not use. “Do you want some?” she says. DUH!! Michelle and I who are big foodies jumped on that. She gave us pounds of burger, sausages and various steaks. Thank you Danielle! Hope your finger is alright! What an awesome day. What a group of awesome gals.