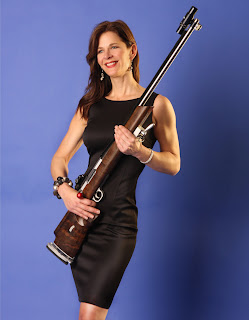 One of my gal friends called me last week and said she was hosting a “photo” party. A photographer, James Warren, www.jwarrenphoto.com, did a special session and set up a temp studio and charged $25 a head to do about 20 digital shots and do minor touch-ups. Bargain! I have always wanted a fun photo of myself with my rifle. Now that I have my new rifle “Carmen”, I thought it was a perfect time. I wanted to base it off of my Avatar image of the girl in red dress holding the AR15. I also wanted to make sure it was classy and not trampy. So I whipped out my Dolce & Gabbana black dress, put some make-up on and coiffed the hairs. I was hoping the photographer could do the rest.

I started with serious, non-smiling poses. Not good. I just look silly. So the smiles came out. James was great at telling me the most flattering positions and lighting angles. Well? I loved this photo the best out of the bunch. He touched up a couple, and I mean only a couple, ahem, of “laugh lines” around the eyes and Voila! I like it! I posted it on Facebook to get a vote from friends and everyone loved it. So this is my new profile picture. I hope you like it also.