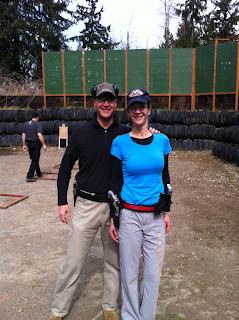 My second USPSA match was up in Marysville last weekend. (Charles and I in photo) I got to try out my new Tanfoglio Elite. Love the gun. A few bugs to be worked out with the magazines we bought. The mag that came with the pistol only holds 15 rounds. We bought some after market 21 round mags that ended up being the wrong size. So we will have to do some exchanges. I had 4 mags to start, one the 15 round one, and ended up with only 3 usable ones. One mag went haywire on me and it took two guys to yank the thing out of gun. That put me back a bit in scores! Hard to compete with only 3 when some stages of fire require many mag changes. One stage I ran out of ammo before I was done. Well, I took “a couple” of extra shots to get some steel plates down so it put me over. You have to plan your mag changes before the stage and you don’t want to be caught with an empty gun. My lesson learned  for the day was to make sure I have exact same count of rounds in each mag each time. And because mags were slightly off I could not load them all the way. Still, a ton of fun to shoot these and I can’t wait to practice more and be a worthy competitor. 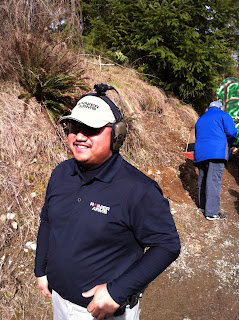 Lisa Munson a world class shooter was there. I had seen her on the Outdoor Channel and did not realize she was from the NW. What a nice woman! She was in our squad and extremely helpful and friendly with information and tips. What a shooter she is! I have some work cut out for me. Charles filmed me in a couple of stages. I look like I am moving in slow motion! What a difference when you put that next to someone like Lisa. At least I did not come in dead last. I came in second to dead last.

The gentleman in the photo with a camera on his head is Aristotle. He said he wears this so he can critique his matches. He started this by accident and it has become a habit and great learning tool for him. Having seen myself on video that Charles took was awful. Yes, definitely a learning tool but I don’t want to do that again until I am a bit better. I know, I am a chicken. Cluck cluck.