CREEDMOOR – The History Of

When I wrote last week about being “Creedmoored” I was very curious where this term came from. Or why it was called this. I knew of the rule itself but had no idea of its name and why. So I went on to the Long Range Forum and all responses led me to a small article about the original Creedmoor. 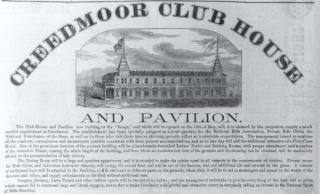 Creedmoor was a range that started back in 1871. Along with it was the start of a little gun club called the National Rifle Association. The land bought for the range was originally owned by the Creed family. The land was thought to have been very scraggly like the moors of England and Scotland. What started as a joke calling it Creed’s Moor later turned in to its official name of Creedmoor Range. Shooting in the civilian sector was catching on. Great Britian, Scotland and Ireland would have their own long range matches (800, 900 and 1000 yards) in Wimbledon called the Elcho Shield. The Irish won
this match for the first time in 1873 and went straight
to the American’s to challenge them. The US Amateur
Club accepted this challenge and it was held at Creedmoor in 1874. A huge audience of about 5000 people watched as the Americans took the trophy away. 1 year later the US went to Ireland to compete and that time in front of 30,000 spectators won again. 30,000! That is like a modern day sporting event. That must have been incredible.

What made the first match held here at Creedmoor so exciting was that the Americans and the Irish were neck and neck throughout the tournament. In the end the match was determined by the very last shot fired by the Americans. They fired the final bulls eye which helped them to win. So my guess is that to this day the term for a tie breaker is called Creedmoor.

What I find most interesting is that this match was the start of The Palma Match. Same matches I participate in with my Palma rifle you have all seen. They did the same course of fire back then shooting at 800, 900 and 1000 yards with 15 rounds per string. In the late 1880’s – 1890’s the Palma Match and the NRA became dormant. Not until 1901 did both come back with a vengeance. Of course to this day both, especially the NRA are still going strong. And I am proud to be part of the tradition!