I have been working my Tuesday & Wednesday shifts at West Coast Armory for just about a year now. I noticed it took a few months before the gang accepted that I may be sticking around and was not just going to work there a few weeks and bug out. Shelley, Marilyn and Joanna were the three original ladies. I was told only recently they were a bit nervous that another woman was going to work there. A strange phenomenon but true that women especially in work environments tend to take awhile to warm up to each other. I understood. Sometimes it is fun to be the few special ones. Thank goodness they all liked me! At least I think they like me. The original three
took a cute range photo of them in a “Charlie’s Angels”
pose. (First photo at top) That was the profile pic for
the first year of WCA. They thought it was time to take
another photo. The first one of the four of us was our
rendition of “Addicted to Love” or “Addicted to Guns”
as we called it. (Second photo down) From there we
have taken several more. Shelley, sadly for us but great

for her, left WCA last month to work full time with
GUNS.COM. The new gal in our photo is Marlyn’s
sister and she works admin in Marilyn’s office.

Needless to say the photo shoots have been fun to do. The photos have been taken by both Jeremy Pagan with JP Visual Design and Roy Lin of Weapon Outfitters. I was thinking since we already have about 6 images we only need 6 more and we can fill a calendar year. Might be fun to make a calendar! A WCA promotional give away. Buy a gun or membership and voila. A gift for you! Of course that is if you think we are as special as we think we are.
Aren’t we? 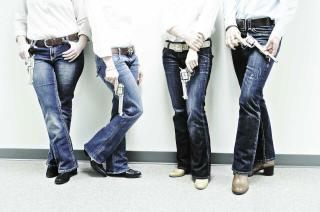