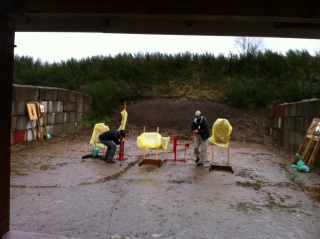 I love Swingers! Now now gang get your head out of the gutter. Not that kind of swingers. Our friend Scott Hawkins who is a major Multi-Gun competitor met us (Charles and I) out at Cascade Rifle and Pistol Range today with his truck and trailer full of all kinds of fun targets. He works for a major target company so he has everything you could want. There were “Swingers” and Turners (not sure if that is correct name) steel plates, Texas Star, Double Swinger, long range plates and more! Unfortunately we were not able to use Star and other pistol steel because the range does not allow it unless pre-planned with the board. Steel in a general use has to be a minimum of 40 meters. So we used the “damn it” plates on the rifle range for 50, 100 and 200 yards shots. What are “damn it” plates? Those tiny, skinny, sliver thin steel plates that make you say “damn it!” because they are a bit difficult to hit. We had to paint them white because the berm was so dark and you really could not pick it out at all. Speaking of dark, it was raining so hard this morning when we all started out to the range.

The rain was sideways rain in fact. Dark skies. I think we all secretly wanted to call it but no one could be the first to admit it. It was actually quite comical. We all did admit it at dinner tonight of course. But at about 1:00 the rain stopped and although still cold it was much better conditions. Scott based drills off of the published stages of Nationals in Vegas coming up. The pistol drills were excellent for me. I worked on my timing of the moving targets. Not having a ton of experience in action pistol the moving targets always freaked me out. He had three stationary targets as well and I learned to make use of those still ones as my peripheral kept track of where the moving targets were and transitioned back and forth trying not to waste precious time. Now I have much more confidence and understanding of how to approach them when I see them. I need more of course and I wish I had the ability to train with these every day. Then we had an important drill of close up targets getting a cadence that is not a double tap. I tend to do double taps instead of a fluid flow of shots across the targets. When I tried to shoot super fast I fell in to the double taps. When I slowed it down I had a great even rhythm and my time was actually better. Next over at the rifle range Scott had us up and down off the ground in our drills. The very wet ground. Thanks Scott.

We actually had two mats but they were soon muddy from sliding on and trampling off over and over. Oh well. I knew a hot shower was waiting for me when I got home. These drills were to engage close up targets then the two far away plates however you wanted and then jump up and run over to the next similar set. Sometimes we started from the ready and sometimes with rifle on barrel unloaded and mag in holster. You learn quickly different ways of getting down in to prone and especially how to get up from that and keep running. Not so easy with a rifle in hand. Once as I was getting up my finger pressed the mag release button as I was fumbling to hold on and it flew out as I was running. That nifty new large mag release button was too big today. I see how this practice is priceless. Does the AMU need an “older” gal on their squad? All they do is practice shooting drills every single day. And get paid for it. And free ammo. Sigh……..

Note to self: move out to the country and build a range in back yard and work for target company to get cool stuff and practice every day all day. Oh and Win The Lottery! Thank you again Scott for spending your precious day with us.