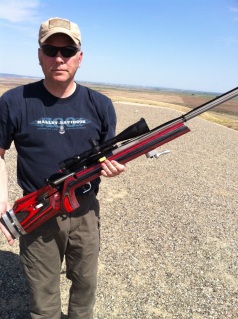 The “Snake” bit today. I guess the appropriate question of the day is who did NOT shoot a miss. Today was brutal! For everyone, not just me. The least brutal scores of first and second place for the day were still…well… brutal. Nice job to Michael Storer and Mike Mauer for only dropping 26 and 28 points respectively. I was cruising along at 800 yards and only dropped 2 points. I think I had one of the best scores. 900 and 1000 yards were another story. So I am in 8th overall for the day. Still 2 days to go and anything can happen. Wayne Budbill was screaming along only 9 points down until he got to 1000. Then the snake bit him. But still in 6th or 7th place I believe. I have mentioned many times how difficult this range can be to shoot at. It is always windy. How much wind you will get is a crap shoot. Although crazy, this place is a lot of fun to shoot at. I do love the challenge. You can’t get upset at yourself here. You could be in last place on day 1 and end up the winner by day 3. Not over till its over baby.

My photo here is of friend and fellow shooter John Van Sanford. I had to show you his rifle he had made last year. Gorgeous! It is a .284 Winchester with a stock design by Jim Cloward but made by Carl Barnowski. It is a laminated stock. Then John himself did the finish work of polishing. The scope is a Leupold 6.5 x 20. This was the rifle he let me shoot last year at the Lodi, WI Championship at 1200 yards. I got 3rd place. My first time shooting with a scope. It is really sweet. (This weekend’s match is all iron sights but John at end of day wanted to sight his rifle in.)

We finished the day with the first stage team event at 800 yards. I am honored again to be on the Wranglers team. There are only two women shooting this year. Myself and 15 year old Brianna. Brianna won junior national champion last August at Perry. She is on the other contender team. We both had highest scores out of all shooters. My Wranglers are in first so far with a comfortable lead. But like I just said, it is only the first day and this is Rattlesnake.