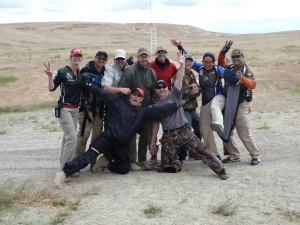 And then there were 10. The final survivors. Squad 5. Actually this would be where Day 3 ends. I pretty much came in dead last for the event but I don’t mind. What an experience. And I had never been exposed to many of the target designs they had here. Because of the amount of content I have for you I am dividing these up in to 3 articles, Day  1 – 3. Then I will finish with equipment stories. Day 1 we were to start with 13 in our squad. Charles had to drop out because of work so that brought us to 12. Notice I still went without him. Heck yea! I was not missing out on this event. 🙂 Then we had 2 members DQ’d on the first day. Let me start by introducing our great squad. In the photo from left to right (back row then front); Myself, Larry Chan, Gregg Lewiss, Kyle Nice, James Dinardo, Brendon Moseman, Jade and Mike Deguzman, Richard Doel (Squad Mom) and Tom Brua. Ironman humbled me. I had a great time and met some awesome people but it kicked my butt. Not only the stage designs but the weather, the body aches, bruises and blood. (Yea, I bled all over a borrowed shotgun. That story is Day 3) Round count averages for stages were about 30 shotgun, 30 rifle and 20 – 30 pistol. That is if you hit each target perfectly! Times that by 11 stages. I doubled that amount in what I brought with me. I think I had 2 rounds of .223 left in my car when I got home. Every stage had at least one of each of the double spinners, polish plate racks and/or death stars. The Death star is like the Texas star but it has “no shoot” plates spinning in front of it. So let me start with Day 1. It had us doing stages 5-8.

Stages 5 through 8 I think were the hardest or longest or most awkward. Okay, all of the

above. Starting at 7am we got sealed in an under ground dark cave and then had to carry a 90# dummy about 50 yards. The dummy may have lost weight over the years because most of “his?” limbs were only half stuffed. Thank goodness for me. I did not think I was going to be able to lift him but it was not that bad. I asked if there was a “girl” dummy and the RO said “This is Ironman, no!”. In the cave you were supplied with a Crimson Trace gun with a light and laser attached. You had to make your way through the dark maze and find targets. Being a little claustrophobic I hurried my way through and came out huffing and puffing. Then I had to grab the dummy and run down to the shooting stage. After dropping him I was supplied with an MP5 to use. Hitting plates on semi-auto mode first then finishing the mag in full auto on the last paper target. Who does not like that? Then of course finishing with rifle and shotgun. The next stage 6 was one I thought I would have the most difficulty with but it surprised me.

The entire stage had to be engaged with your weak hand trigger finger. You could still use

both hands on your pistol but the trigger finger had to be the weak one. I had never really shot my guns this way. I actually was comfortable with the pistol and did well on stationary targets. The moving spinners and polish plate racks were another story. My main concern for this entire match was that being so new to this I had no opportunity to practice most of the props they had at Ironman. All of my local ranges either don’t allow steal plates or don’t have the elaborate ones. Of course there was if not one but two spinners or polish racks at every stage! So to have to shoot weak hand on moving plates got me. But the fun ending of shooting over and under the poor car was worth it. This is the stage where are first DQ’d shooter was sent home. He came to the start with a round in his shotgun chamber. You are to come to the line with an empty chamber and make it hot in front of the RO. Oops. And then there were 11. That was my shooting buddy! I lost both of my shooting buddies! You need  a buddy to help you through the stages at times with more ammo or coaching. My awesome squad stepped in and helped out. Everyone helped everyone. Moving on to Stage 7.

This stage was difficult for me because of its length and shotgun round count. All 3 Gunners 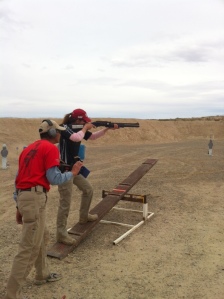 know that loading the shotgun will make or break you in time. It is easy to get nervous and tense when you are trying to hurry. I found that in long strings my hand would almost cramp up and I struggled to load. At home when practicing I can load quickly all day long of course. We had to engage slug targets and pistol poppers from 2 teeter totters. They were stationary so we did not have to balance thank goodness. Then you had to run up a hill and just when you are out of breath they give you a double spinner to shoot with your pistol. Sheesh. And the wind was coming directly behind it and basically made it impossible to flip over. Oh! Speaking of wind! The morning was sunny and calm. Then the winds picked up. It was crazy windy and brought us crazy dust storms. People had bandanas covering their faces. Ironman warns you of the Parma Dust. A very fine, get in every nook and cranny on you and your gear kind of dust. Charles told me to bring large plastic garbage bags to keep my rifle and shotgun in. I was teased for having such stylish gun cases at first. Then I noticed everyone’s guns in the racks getting covered in dust. And that was only at the beginning of the day. When I got home that night my guns had no dust or grit anywhere. Just the normal dirt of shooting all day. All others complained their guns looked they were dragged behind a car in the dirt. Winner!

Stage 8. My worst nightmare because it had 2 of each of the spinners, polish racks and death stars with pistol. You get kudos for at least engaging targets but if you don’t spin a spinner then they dock you 60 seconds! And that is even after you took 60 seconds trying to turn it and you fail. And again tons of bird shot rounds. There was to be a moving rifle target but they took it down because it kept malfunctioning during the Open competition earlier in the week. Stage 8 is where we lost shooter #2 to a DQ. He had an ND while reloading his pistol up and over the berm. And then there were 10. I think we got off the range that evening around 6:30. A 12 hour day. I still had to get back to the hotel, somehow eat and somehow clean 3 guns. Bed time 11pm. Call time tomorrow 6:45am.