About three years ago I promised myself that I would go out of my way to try new things. Things that were out of my comfort zone. Two days ago I just did something I never thought I could do in a million years. Give a speech. I know many people have this fear of public speaking but mine was debilitating. And if you read the article I wrote just before this one you know that I just got back from Perry two weeks ago. I had a rough time there and was still feeling sorry for myself which added to the stress of speaking at this event. But as I approached the podium on Monday morning and stood in front of this group of  women my fear melted away and my attitude of my Perry experience changed. 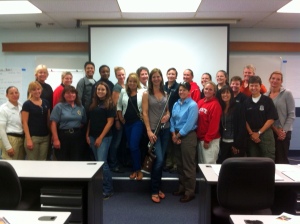 of Louka Tactical Training.  My friend Shelley-Rae and I wanted to start a “ladies cocktail hour” at Shot that would gather women of the gun industry in one place for a networking meet and greet. We kept it low key for the first time and a nice group of about 10 ladies attended. (We forgot to get a photo of everyone before they left so photo at right is of the last few of us). Lou Ann and I started talking and after only a few minutes she asked if I would speak at one of her tactical training clinics. Caught up in the moment, and perhaps a couple of cocktails, I said yes. Although she told me about her training company and their mission I really did not know what I had agreed to. And to be honest I was not sure how serious she was of the invitation and if she would even follow up with me after Shot. She was serious.

hotel info, etc. Talk about a snap to it organized woman! Louka Tactical offers training to public safety agencies across the country. A majority of their focus tends to be for women in public safety agencies such as law enforcement and firefighters. They offer courses such as police cycling, survival, defensive tactics and combatives, fitness and nutrition and many more. My favorite part of Louka is their  sub-theme of Building Warrior Women. A philosophical concept that women are strong and independent and willing to fight for their principals regardless of the outcome. Their mission is to instill a stronger mental place that is carried through out ones personal life as well as occupational life. The Joan of Arc quote at the top of this page is the Building Warrior Women tag line. But let’s not forget also that they are training people to kick some ass. I had the pleasure of meeting two of several of Lou Ann’s instructors the night I arrived in Dayton.

Now Lou Ann herself has quite the list of experience in her field. She has been in law 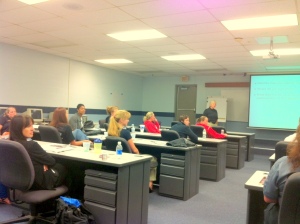 Classroom in action. Instructor Penny Phelps at head of class.

enforcement since 1990 and currently works for the patrol division of a Michigan-based police department. Her roles during her law enforcement career include uniform patrol, bike patrol, undercover narcotics and prostitution operations, and a temporary assignment with a DEA Task Force. She holds a Master’s degree in Human Performance Technology and Instructional Design from University of Michigan. Lou Ann travels the country with her huge pick up truck hauling a huge trailer full of lots of tactical training “stuff”. As well as the super protein drink blender. She is uber fit and an avid bike rider and eats way to healthy for my taste. The other instructors were Captain Penny Phelps with the Monroe County, FL sheriff’s office and Sergeant Cynthia Williams with the Palm Bay Police Dept. also in FL. All three are amazing leaders in their fields. Penny is the energizer bunny. She is “on” always. And so funny. A great presenter who instills leadership skills in her students. Unfortunately I did not get to stay and watch Cynthia teach her combative course the next day. Standing next to me Cynthia maybe came up to my shoulder. But I would not want to pick a fight with her. She is not only a SWAT team member but trains in Tae Kwon Do and Brazilian Jujitsu. When she is not working she is at the gym hitting the weights hard. Studette! And adorable. It was not just these three amazing women that inspired me. It was the class room full of the LE women I was standing in front of.

As I said earlier the last couple of years I promised myself that I would conquer certain fears and try new things. I figured I had 7 months to prepare for this speech.  Most people who know me would not have any idea of my shyness or lack of confidence at times. I come across as a very confident person. But I am one who often does not show my emotions. Okay, except when I cross-fire at Nationals. I have always lived by the phrase “never let them see you sweat”. Inside I can be a nervous wreck. But I will never let anyone see that. My husband always said he loved that I am aloof. Not so sure that is a good thing but I’ll take his word for it. He did marry me after all. So for the last 7 months I have had a nervous pit in my stomach trying to get ready for this one hour talk. Of course I did not sleep at all the night before. The morning of the clinic I went in early with Lou Ann, Penny and Cyndi to help meet and greet and register the participants. Mingling with all of these women started to put me at ease. I was worried at first that a room full of LE ladies would be a tough crowd to please. Was I ever wrong. These women came from a variety of cities and had a wide variety of LE duties. Some were fresh out of the academy and some had been in for 20 plus years. As they each introduced themselves and told their stories my fear of speaking started to slip away. Who am I to think I am the only one that has fears and has screwed up at times. My accomplishments as a competitor are wimpy compared to the sacrifices, accomplishments and the impacts these women have made on the lives of others. They love what they do. It is their whole life. Next thing I know Lou Ann was introducing me. I don’t remember walking up to the stage but I remember that suddenly I felt calm. I love what I do as well. Shooting is my life. I love telling people about it. The words flew off my tongue as though I was at a small dinner party talking to friends. I realized that the last few years of competing have changed my life. I have traveled the country to matches by myself and usually am the only woman or one of only a handful of women present. I have infiltrated a male dominated sport all by myself. I have made lifelong friends. I have a blog and a FaceBook Fan Page with several hundred fans.  I remember meeting Dennis the US Team Captain for the first time and telling him straight out to keep an eye out for me because I would be on his team.  I had the nerve to go to Shot Show this year and ask for sponsorship for 3 Gun when I had never even had one match under my belt. I realized as I was speaking to these ladies that I really had conquered a lot. I also realized I needed to let my Camp Perry incident go. I am a good shooter. I can only ask myself to perform to the best of my ability each time I go out there. Sh*t happens. Get over it.

My speech went better than I had expected. Lou Ann told me it was exactly what she was hoping for. We spoke of possibly doing this again and she suggested I should consider speaking for other types of women empowerment seminars. Wouldn’t that be a weird change of fate? I thank Lou Ann for the opportunity and I thank the courageous women students for their personal stories of inspiration to me.