Let Gear Be Your Guide! 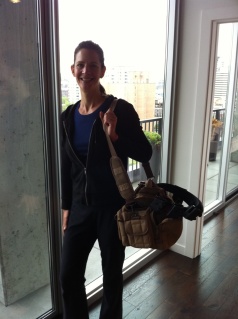 Now that I have competed in several shooting sports I am amazed at the difference of equipment and funds needed to get into competing. People wanting to get in to competition in any gun discipline may have a tough time deciding which one to start with.  I can honestly say one way to go about this is, “LET GEAR BE YOUR GUIDE!” All shooting sports are expensive but if money or space is a factor you may want to consider some options.  Competing with pistols is a great start. One can do Bulls Eye an NRA and CMP event, IDPA, USPSA and I am sure there are some others similar. These pretty much require a handgun, belt, gun and magazine holsters, eye and ear protection and your bag to carry them in. See photo at right. Easy! One bag of stuff! Traveling by plane is nice with this also. Of course your ammo can weigh a bit depending on how big the match is. And yes, pistols can run you $1000 – $4000 depending on class and accessories but you can get started at the lower end.  Now my sport of high power rifle is a big money and space killer.

I use a custom AR15 for high power and my custom Palma .308 rifle for long range. Crazy expensive pieces of hardware there. The AR can run about $1500 – $2000 with specific barrels and triggers. The Palma or long range rifles are $2000 – $6000 with all of the goodies attached. YIKES! Now add my leather shooting jacket. shooting mat, spotting scope and stand, rolling and/or standing cart, shooting glove, elbow pad, special glasses, special hat (dorky hat really) and lots of ammunition for these matches. Flying with all of this can be a chore and spendy extra baggage fees. And most airlines only allow for 11 pounds of ammo. Then there is 3 Gun. 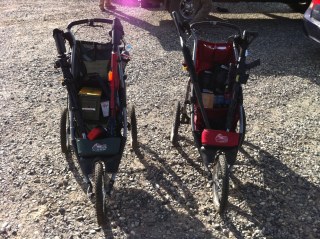 I was humbled after the match last weekend. Granted I don’t need the coat and mat and scope but with the 3 firearms needed which includes pistol, shotgun and rifle one also needs belts, MANY holsters and magazines, a stroller (yes, guys buy the jogging baby stroller) and more ammo than you could possibly imagine you are in for a really expensive and space consuming treat. My waist was not big enough to even wear all of the holsters needed! I see now that competitors had thigh holsters also. Flying to a match? Forget it. I personally would drive to every match across the country with all of that stuff. Better yet, my future sponsors will have it all there waiting for me………….