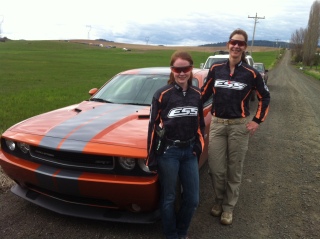 Day 2 of our ESS Boomershoot 2012 journey. This morning we head up the mountain again to our friendly farm turned gun range. The drive up is stunning. You are on a windy road at edge of cliff over looking green rolling hills and farms. It was sunny and just so spectacular. Lots of wild life out right now. We took the normal roads up so we did not have to abandon my car. A funny theme to this trip is that coincidentally the team shirts that Ari from ESS ordered for us have an orange stripe that matches my car perfectly. We look more like a racing team from the movie Canonball Run than a shooting team. But our shirts are awesome right? You might find me wearing it around Belltown. Sorry, back on track. Today was a practice day to get an idea of the different elevations.

Using trees, bushes or boulders as landmarks we were able to walk each other in to some steel targets they set out. The range is set from 400 yards up the hill to about 700 yards. These targets will not be there tomorrow so we really had to take note of said landmarks as certain elevations. I have a scrawny drawing of the landscape in my book. Gene Econ a high power friend of mine was one of the instructors and helped us. He trains Special Forces and Army Rangers. He was awesome. Especially with Shelley who really had never used a spotting scope to see the trace of the bullet and call wind and mirage. He taught her the lingo to communicate with the shooter. She picked it up quickly not to mention firing the rifle also. Using a scope to shoot with rather than iron sights is new to me as well. We used the Leupold VX3 8.5-25 scope that they sent me. It has taken a very short time to get used to it and I can now see the fun in shooting with scopes. The results were evident. We made a great team when it came to our explosive targets later in the day.

At 3:00 they gave each shooter 3 explosive targets to set up where we chose and paint them so we could differentiate them from all the others. These were at the shortest distance of 400 yards. We each got 2 small and one large target. Shelley shot first and I got her on it on the second round. Kaboom!! Of course a “Woo Hoo” and a high five or two came with it. Shelley walked me in to my targets well also. We got all 6 in pretty good time. I should say 5 of 6. We kept hitting one target but it would just go flying around and land in another spot. We chased it around until it buried in the dirt and we could not see it any more. You have to hit the boxes just right or they will only flip around. And sometimes they just don’t explode. We end the day with another round of High Intensity. I have been using my JP and love it!! Videos and photos to come gang I promise!

I am finishing this article the morning of Boomershoot Sunday. One of the volunteers, Sarah, who helped make the explosives, showed me a photo of her holding one of the targets that will be hidden out there somewhere today. It is a pink bunny. Mission – Blow up Pink Bunny.